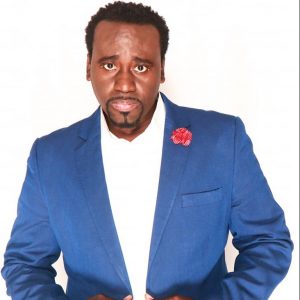 Comedian A-Train, seen on WEtv’s Braxton Family Values, The Low Down with James Yon, River City Live, First Coast Living, and The Chat, is an electrifying headliner—clean yet formidable traveling, stand-up, and corporate comedian, host and emcee for any platform.

His newly released comedy album, Comedian A-Train, Live From The Atlanta Comedy Theater charted in The Top Ten on iTunes and is available on all digital platforms and currently streaming on Pandora. https://orcd.co/comedianatrain
​
He’s had the coveted pleasure of opening for Original King of Comedy DL Hughley on many occasions, has toured with Kountry Wayne, and has featured for the biggest names in clean comedy—Preacher Lawson (AGT), Michael Jr., KevOnStage, and Dave Coulier (Uncle Joey of Full House). He has had the honor of sharing the stage with some of his favorites like: Pete Lee (Jimmy Fallon and VH1’s Best Week Ever), Comedienne Dominique (Last Comic Standing), Bill Bellamy (Who’s Got Jokes and Ladies Night Out), Ali Siddiq (Bring the Funny and Comedy Central), Loni Love (The Real), Deon Cole (Blackish and Grownish), Ronnie Jordan (Bossip), Huggy Low Down and Chris Paul (Tom Joyner Morning Show), the legendary Elayne Boosler and many others.

Hates: That Chick-Fil-A waffle fry with elbow skin on it