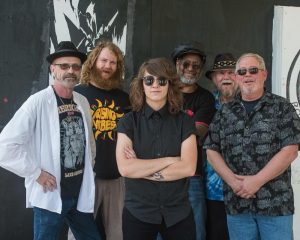 Voted as “The Triads Best Local Original Band” of 2020 by Yes! Weekly, LaRue and her band reach the masses with messages of positivity, hope, good vibes. As the band’s acoustic guitarist, vocal powerhouse, LaRue, is accompanied by Trombonist, Jeremy “Bones” Rodgers, Electric Guitarist Horace “H-Bomb” Bennett, Bass Guitarist RAS Ralph Duiour, Drummer Lars E. Hartmann, and David “Piano Dave “ Morse on Keys. A blend of Acoustics, Reggae, Alt-Rock, and what can only be described as “her sound,” can be heard in “Up In Smoke,” the band’s latest single, which was released December 2020.