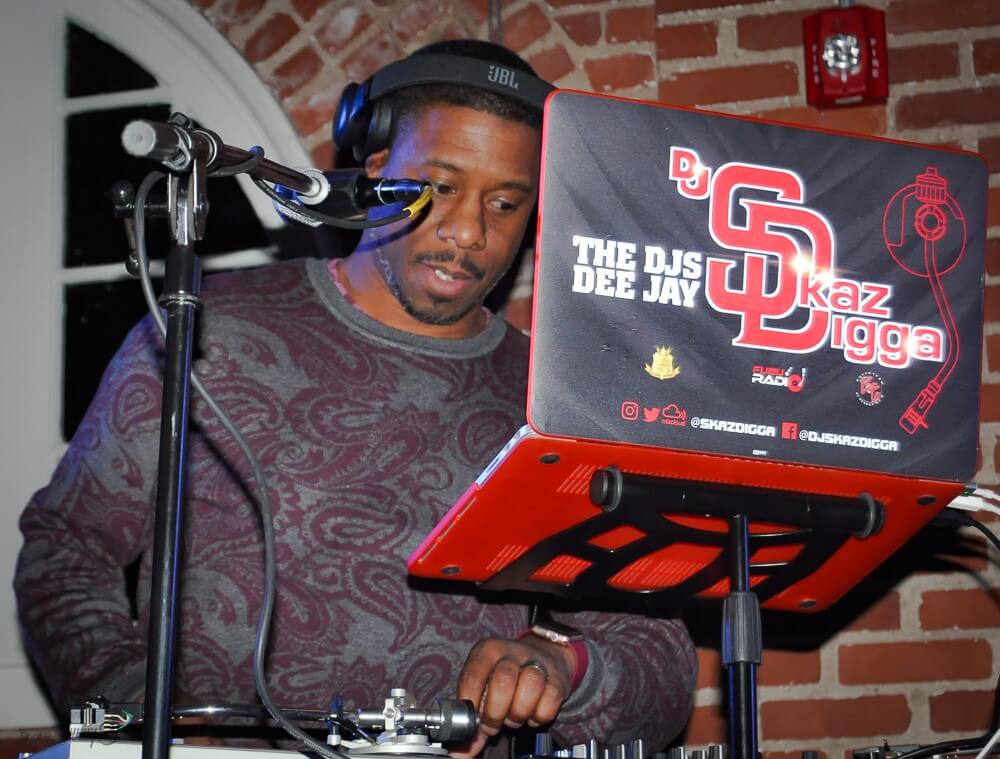 Started out doing local house parties and mixtapes. Co-Founding Earthquake with Dexter Scott in 1992, they performed weekly at a club called the Sportsman Lounge. Skaz began to DJ many clubs that had major hip-hop shows, such as Club Rhythms in Holly Springs and the Ritz in Raleigh. Skaz began to be the Host DJ for all major shows Do in North Carolina for artists like Lost Boyz, Big, Wu-Tang, Redman, Busta Rhymes, Gangstar, Lil Kim, Mobb Deep, Smith and Wesson, Das EFX, Keith Murray, Etc.
Co-Founding a chapter of a production company called Nasty Fruit with Mr. D.O.L.O. (AKA) Desmond Alston quickly became the next feat in the process of Skaz becoming a dynamic producer and engineer adding to his DJjng ability. The group was called Full Circle in which he was the DJ and Mr. D.O.L.O was the rapper, even though they both did all the elements of Hip Hop.

He was then approached by a fellow DJ that was on the college radio circuit, Mike Nice which had heard about his talents for rocking parties & doing mixtapes. Nice had been DJing on the radio along with DJ Madd on WXDU 88.7
at Duke University for some time and invited Skaz to DJ on the show as a guest. He felt Skaz was a great Dj along with wit others he had in mind to start a dominating DJ powerhouse that could monopolize the local/regional markets later known as The World Famous Butta Team Crew. The DJ collective ended up hosting a radio show on North Carolina Central University station WNCU 90.7 that had a 10 year run from 1995 until 2005, introducing the market to all the exclusive new and underground hip hop on Saturdays from 4-8 pm. This is where Skaz Digga honed and nurtured his radio and mix experience.

Next up, was starting a local studio where he dealt with all the local artists, helping them develop their skills as rappers or R&B singers. In developing groups and artists. He then discovered some teenagers rapping at a local venue and took them in under his wing developing their sound and style. The group is now known to the world as Norfclik pronounced (North Click) which consisted of Small World & Brolic D the national recording artist signed to Def Jam through DTP (Ludacris).
Skaz has helped develop and/or produce lots of local artist such as (Camara (Wingspan Records), Whutsiznaim, Jozeemo of the (Justice League), M.O.S. signed to (Jive Records) helping these artists develop and producing them well before they became a major recording artist and helped the studio Skaz owned evolved into a Major Studio for Raleigh and Durham Hip Hop Music Culture.

In 2000 a mutual friend introduced Skaz to the Hip Hop legend (Big Daddy Kane). Kane had been in the Raleigh/ Durham area off and on for about seven years and was hearing on the radio about DJ Skaz. He was known as being the hottest party/show DJ in the area. Kane decided to approach Skaz about becoming his DJ on the road and rocking with him and the union of Big Daddy Kane and Skaz began as he is still Big Daddy Kane’s DJ currently, they perform 10 to 11 months a year.
Years later after traveling the world as the road DJ for Big Daddy Kane, In 2004 Skaz formed a company with a few of his childhood friends, the company consisted of a studio (Flavor Fruit Studios), a record label (Flavor Fruit Ent.), and a production team called the (Neck Breakas). Skaz was introduced to another producer that was doing great work around Durham and Raleigh. They decided to make a superpower team for music and help create the North Carolina sound and use both their connections to bring the music industry and create a market in North Carolina.

Skaz and his partner Antwoinne McLendon were approached about providing the musical Soundtrack and doing the SCORE for a Documentary called (Welcome To Durham). All the music was produced, recorded, and mastered at Flavor Fruit Studios by the production team called the Neck Breakas which consisted of Mike Blayz & Skaz Digga. The Soundtrack and DVD for Welcome To Durham can be purchased in any F.Y.E and were available on DVD from Netflix. The dynamic duo, now known as the Neck Breakas has 4 albums [My Soul To Keep (Kal Royale), 2006; Come With Me(Fa`licia Joseph), 2006; Set it Off (Lil Maq), 2007; A Holiday Tribute(Flavor Fruit Christmas Album),2005] and 2 soundtracks [Welcome To Durham, USA; 2007 & Torn (independent film- Lilac Films; 2007)].

In 2008, The opportunity was presented to be the DJ/Host at McDonald’s booth at the CIAA Ford Fan Experience. He impressed the company so much that they invited him to do the same at the annual Essence Festival in New Orleans alongside the likes of Laurie Ann Gibson (P. Diddy and celebrity choreographer), Darrin Henson (Stomp The Yard/Soul Food/Choreographer), Pooch Hall (The Game) & Taraji P Henson (Empire/Baby Boy) to name a few. He continued to do these annual events for the next 8 years consecutively.
A mutual peer/friend and fellow recording artist of Big Daddy Kane, Doug E. Fresh saw great potential in Skaz Digga and approached him to be a guest DJ on his weekly radio show on the New York airwaves in 2013. The number 1 rated Doug E. Fresh “The Show” airs Saturday nights on WBLS 107.5
and serves as the platform that would catapult this DJ’s DJ to the next level of notoriety that he earned and deserved. He is now a regular on the show and a member of Doug E. Fresh’sThe Get Fresh Crew’. In addition to still touring the world with the Man, The Myth, The Legend Big Daddy Kane this man has made a name for himself within and outside of the Icon that once discovered his talents.