Age: 18 and up | Seating Type: Reception style and table reservations

Join Joe Biggs and the Greek lines of ’89 for the kickoff of the Stephany Hand Biggs Scholarship fund during NCCU’s homecoming weekend.  The Chuck Brown Band and DJ ALLNITE promise to deliver the best live music show and dance party since the School DAZE of the Sweat Box.  Greeks – rep your letters.  Alumni – rep your ‘nalia.  Heavy hors d’oeuvres, signature cocktails, and a stroll down memory lane set the stage for a remarkable homecoming party with a purpose.

ABOUT THE CHUCK BROWN BAND 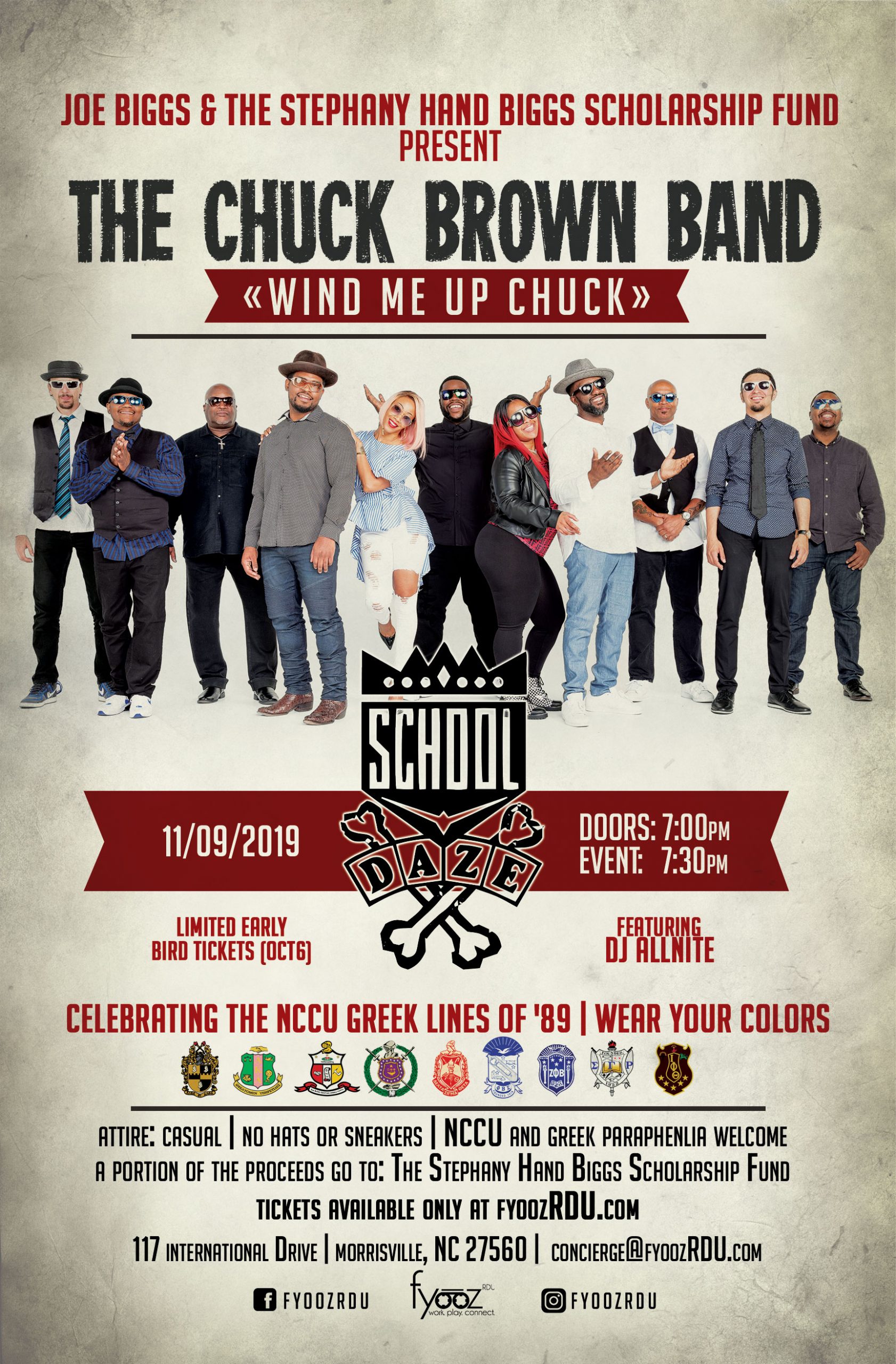 “The Godfather of Go Go,” Chuck Brown is the undisputed sole founder and creator Go-Go music, a hypnotically danceable genre deeply rooted in funk and soul that he developed in the early 70’s , and  the only form of expressive culture  to originate in the District of Columbia.  Foreshadowing rap and many of the major popular R&B styles of the past three decades, Chuck’s signature style earned him a place in American musical royalty.  This esteem was maintained by the reputation of his legendary live shows, heavy on audience participation and built around “the beat” to create an unparalleled non-stop party atmosphere.

Chuck  recorded with artists as diverse as Thievery Corporation, Brian Culbertson , Jeff Majors and Kindred the Family Soul.  A street in Washington DC was renamed “Chuck Brown Way.” In September 2010 Brown released an ambitious three disc set “We Got This” which includes the Grammy nominated song LOVE featuring Jill Scott with Marcus Miller.  The National Symphony Orchestra paid tribute to Chuck Brown in September 2011 with 2 commissioned works of orchestral arrangements and a performance on the West Lawn of the US Capitol.  Attended by an estimated 50,000 people the NSO and Chuck performed together, followed by his band in concert with guests Doug E Fresh and Sugar Bear.  Chuck Brown passed away on May 16, 2012.  Chuck Brown Memorial Park opened on August 22, 2014.  The Chuck Brown Band, who toured the world with the Godfather carries the torch and keeps the beat and legacy alive.

A portion of these proceeds from this event will benefit the Stephany Hand Biggs Scholarship Fund.

The Stephany Hand Biggs Scholarship Fund was created in remembrance of Attorney Stephany Hand Biggs who lost her battle with breast cancer on June 30, 2019. Mrs. Biggs was a proud graduate of North Carolina Central University for both undergrad and law school. She entered NCCU as an Honors Student, was a member of the highly recognized touring choir, a member of the Alpha Chi Chapter of  Alpha Kappa Alpha Sorority, Inc on NCCU’s campus, and President of The Law Students Association while in law school. In her law practice Stephany did a lot of non-profit, church, and real estate law (Law Office Of Stephany Hand). She also did work in the non profit sector being employed by NCCU, Mount Peace Baptist Church, and Building Together Ministries during a period when she closed her law practice for a few years. She reopened her practice and eventually closed it for good in November of 2018 to become Legal Council to the Sheriff’s Department of Durham County. Because Attorney Hand Biggs had such a giving spirit this fund will provide financial assistance to students of NCCU in each of the areas she touched while there. There will be monies offered to an incoming Freshman Honors Student, a member of the NCCU choir, a member of Alpha Chi Chapter of Alpha Kappa Alpha, and a law student going into their second year (2L). Stephany believed “a blessing isn’t a blessing until you pass it on” and that’s what this fund will do.

✅ Group tables available while they last