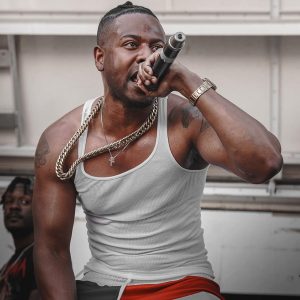 LVitto is from Durham, NC aka the “Bull City.” He’s an Artist, Supreme Lyricist, MC hybrid, and CEO of a full-service entertainment company called Family Bizness. He calls himself the “Red Word” speaker, as he speaks truth similar to the way the words of Jesus words were highlighted in the Bible.

His grandfather used to sing and play instruments for his church. Yet, the gift of creating art has always been passed down from his father’s side of the family. LVittos’s passion for music was conceived at age 10 when he first saw the “Victory” music video by Biggie Smalls. It was his first music video that he’s ever seen with such a cinematic visual, not to mention, in his opinion, Biggie delivered a captivating performance lyrically. The entire roll-out compelled him to make music.

As an artist, he pulls his inspirations from different experiences in life, thoughts, and reflections. He is inspired by many forms of art and artists such as Jean-Michel Basquiat, Pablo Picasso, and of course inspiration from family, the weather, the news, and life. In his opinion, “life is the most influential component” that ignites his drive, passion, and creativity!

The music that he’s creating now speaks to his current position mentally, spiritually, and as an Intelligent Black Man in America. He goes on to share that “the music he is currently working on is some of the best he has ever created. The LIGHTS, CAMERAS, and some incredible visuals will be coming out very soon! Also, he plans on reaching out to the youth so that they can grow with his music. He hopes to guide them in a direction of creativity, entrepreneurship, and ownership!


Loves: The ability to create


Things that I dislike: Pessimists